Bloodgroup at Harpa during Iceland Airwaves 2013

It’s been said their name was a spur of the moment creation.  Born out of quick thinking by Raggi when a radio interviewer needed their band name.  And as 3 of them, Hallur, Ragnar and Lilja were siblings, the name fit.

Bloodgroup’s first album, Sticky Situations, was released in 2007.  At the time it was compared to bands such as The Knife and CSS.  The music is layered, with unique use of unsymmetrical breaks covered with heavy dance beats and hyper lyrics provided by Lilja Kristín Jónsdóttir .  The uniqueness of the album quickly made it my first choice when running.  Odd as that seems, the beat kept me going, and the unique breaks kept me interested.  Here’s their epic video for “Hips again:”

Their second album, Dry land, replaced the unique breaks with unique sounds, all still multi-layered and wrapped into great dance tracks the lyrics went from hyper to haunting.  There is still a strong flow to the lyrics, but they carry more weight and tend to float over the beat.  It’s more complex than Sticky Situations, and a lot more mature as well.  Here is one of my favorite tracks, “Moonstone:”

The new album, Tracing Echoes, was released in 2013.  Much more heavy and dark, the album takes on a mature feel.  Sunna’s ability to float over the dance beat now includes a substantial amount of haunting as well.  Her vocals really come into their own on this album, strong but smooth, like a couple fingers of Johhny Walker blue.

At Airwaves this year, they were joined by Þorvaldur Þór Þorvaldsson (Doddi) on drums.  As stated before, I am a big fan of Doddi’s drumming, and it was awesome to see the live drum element into a dance bands set.  Even the more downbeat pieces come alive during Bloodgroup gigs, and it’s rare to see any of them just standing by their instruments.  Sometimes I think they rock out harder than the crowd. 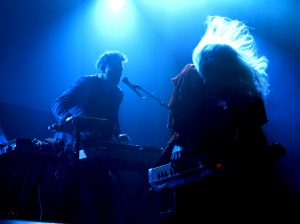 That hair, making me wish I had more than a point and click with me

With flying hair, rocking synths and keys, they get the crowd into the music not only with the crazy layered beats, but lead by example.

You can keep up with their musical shenanigans on their Facebook page and keep up with tour schedules on their website.  They have a pretty extensive track list on Soundcloud as well.

The band was nice enough to answer my 4 nonsensical questions:

2. If you combine all of your favorite colors, what do you get? Something dark, maybe purple with a dash of green in it

3. What are 3 of your favorite little known bands of Icelandic origin? Skátar, Vax and East Coast Speed Salmon (one of my biggest regrets is not seeing Skátar live, so happy to see them make a list. –RB)

4. If you could be any creature playing your favorite song, what would the creature be? And what is the song.  We would definitely be cats playing Elton John’s Tiny Dancer