FM belfast is by far my favorite dance band to see live.  I’ve jumped up and down and picked confetti out of my hair for over 8 years watching this super-group of musicians and they’ve never let down.  Their 4th album, “Island Broadcast,” delivers that party feel and has quickly become my second favorite album of theirs, only slightly behind “How to make friends.”

The beats on the album are much more energized and dance-able than “Brighter days,” but there is a strong undertow of reality with the lyrics, creating a unique contrast that solidifies the album.  Each song on the album is it’s own story of growing old but not growing up, holding your head above water and encouraging others to do the same, and spending what little time we have on this rock enjoying where you are and what you have.

While I could go through and describe what I felt track by track, I’d rather just highlight a few of my favorites and post videos so you can make up your own mind.  The only official video I could find for songs on the album is the album opener “All My Power.”  A back and forth of two folks, one who feels guilty, the other the reason why:

My favorite track on the album by far is “The Game”

“You’re so pretty” began as a short story written by Lóa about aging restlessness.

And “Fearless Youth” was written by  Örvar Smárason and is a tribute to youth and friends of the past.

I asked Lóa a few questions and she was nice enough to answer, here they be:

The contrast was not intentional no, unless Árni meant it to be so and forgot to tell me. I don’t know why the album is more lively. Maybe because we finally realize that we have nothing to lose. The track Strobe for instance is just a rave mantra to dance to. It’s not necessarily a logical track to be on the album but I don’t care about things like that anymore. Trying to do what you think people want you to do is futile.

“Them and they” usually means some force or people who are more powerful than you and control something in your life or want to control you. It’s not about anyone in particular, it’s more about trying to stay sane in our strange world.

You and me are being encouraged. Because we feel like we are so powerless when in fact there are so many of us who feel the same way. I like to believe that most people are nice, if they weren’t the world wouldn’t function.  I’d also like to send my greetings to the voices in your head.

It’s personal on many levels. We write the lyrics together most of the time so it’s a bit of a puzzle and it means different things to us. For me I’m having a bit of a crisis of what I should do now. I don’t have a plan but for some reason I keep coming back to the idea of having chicken in a backyard and grow vegetables.

All of us take the blame for the people in power. The bright light is about hope and the weird need to believe in something or someone. For me it’s kind of a cry for a decent politician coming out of the woods to save us. I’m not a religious person and I’ve kind of lost hope in politics but there’s always a part of me that is hoping for some kind of female Che Guevara… ok this sound stupid but sincerity will do that to you.

Island Broadcast is available digitally, on vinyl, and on CD.  It’s available on Spotify, and if you want to purchase it any of your digital outlets should have it.  The vinyl and CD are available via their website.  Follow them on Facebook and and Instagram to be notified of touring dates and events.  You can also see the concert photos I’ve taken here: 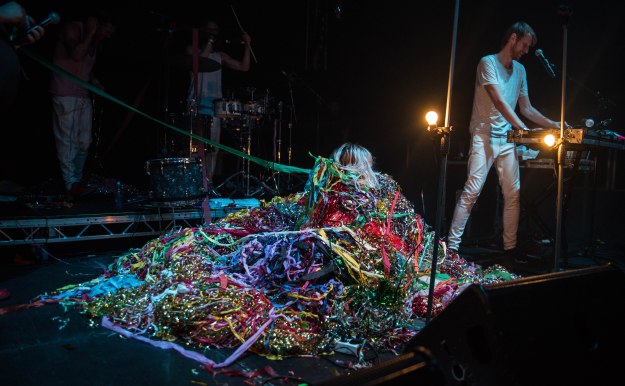