Officially day one of Iceland Airwaves.  For me, it started with Vigri and ended with FM Belfast, and a lot in between.  I took a fair amount of pics, and instead of flooding my blog with them, I have created a set for Airwaves on my Flickr Account.

Vigri’s off-venue set at Backpackers was a good way to start.   Now a 4 piece, they played some of their old catalog, and even with sustainability issues, the endured.  They mentioned a new album in the works, and played a few new tracks, most notable was the set ending “I Follow,” a longer track with a great build up and fantastic ending.

Next up was the Kimono off-venue show at Bar 11.  They also had a few new songs to try out on the crowd, there is more of an electronic element now and I quite like it.

They ended the set with a remixed extended version of Black.  and by remixed and extended, I mean Kjartan thundered away on drums for a very long time while Alison and Gylfi laughed about not playing.

Next up was Metz, I had gone outside for a brief minute after the Kimono show, and when I returned to see Metz the basement was so packed people were on the stairs huddled down trying to see.   Sitting outside I could hear them and it was nuts.  Luckily I got in to see the last track, and as people were being tossed up into the ceiling the band was sweatily bouncing around the stage.

After Metz, it was back upstairs to hear Kajak play.  Very energetic duo with keys and a Korg.  Trippy lyrics backed by dance and rock beats, the windows were rattling from all the energy.

This ended the off-venue part of the day for me, and it was time to quickly grab a Pylsa and head over to the YLJA gig. 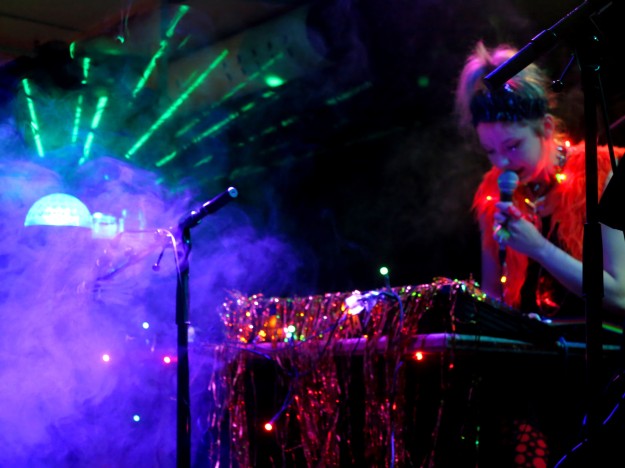 I went in the wrong door and ended up at DJ Flugvél og Geimskip’s show.  She was so happy and as I stayed for a few songs I couldn’t help but smile.  Very high pitched voice and dance beats, with fog and a rotating light ball, very creative and entertaining.

YLJA was next door.  A 5 piece consisting of 2 chanteuses surrounded by three talented guys.  Very soothing folk rock, and they played well together.

Next, after a brief musical intermission with friends, we headed off to see Þóranna Dögg Björnsdóttir.  It was a audio visual set with a large backdrop of morphing images combined with audio cues.  Relaxing and surreal.

Stroff was next, these guys were on my list of bands to see.  Very 90’s west coast America feel to them and with only a few technical issues they played a great set at Amsterdam.

After Stroff back to Harpa we went, it was time to see FM Belfast, we were a bit late so we had to sit in the back of the crowd, but FM Belfast was doing what they do best, throwing a party.  Masses of people jumping up and down, in the photo above you can actually see the masses crouched down on their knees eagerly waiting for the band to cue them explode into dancing happiness.  There were streamers, confetti and sorts of mayhem.  They always seem to have a lot of fun, and they did not disappoint last night.