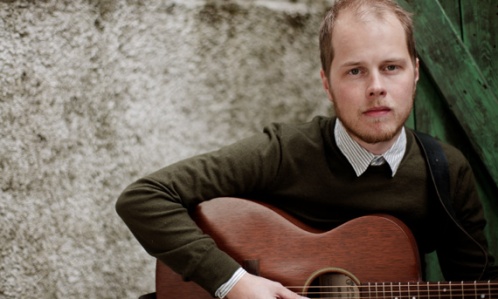 I’ve always talked of the hard work Icelandic musicians put into their craft.  Snorri Helgason is the personification of this.  He tours more than humanly possible, constantly collaborates with other Icelandic musicians, and has been been part of programs such as Taste of Iceland and Iceland Airwaves every year.  He works hard, very hard, and we the listener are the benefactors.

Snorri’s career started with his band, Sprengjuhöllin.  They released three great albums, all of which won awards and were well received by the Icelandic public, including one single that lasted 27 weeks in Iceland’s music charts.

Continuing to evolve, he released his first solo album I’m gonna put my name on your door which was also well received.   Ironically, the title track from the album speaks of settling down, quite the opposite direction Snorri has taken, and combined with the final track When a good thing dies, the audience is left somewhat misled about the future of Snorri Helgason.

The album itself is smooth; perfect for a rainy day or relaxing road trips.  Reminiscent of Nick Cave and Harry Nillson his ability to modernize that 70’s soulful folk makes for an enjoyable album trip, one of my favorite songs on the album is Don’t let her.

Next came Winter’s sun.  This is my favorite of his albums to date.  There are hints of 50’s rock and soul on tracks such as 99 songs, and splotches of blues on The Butcher’s Boy.   Spending time in Iceland during a Christmas break, Snorri was playing music with Sindri Már Sigfússon from Sin Fang and they decided to put an album together.  With Sindri producing and Snorri playing the album is a perfect of example of adding more without adding too much.  Vocals are more sharp and energized, there are more instruments, and more people backing him up, such as Mr. Silla from Múm, and Sóley.

One of my favorite tracks from Winter’s sun, Mockingbird, reminds me of a Motown era jam.  Very smooth, with a rock influenced beat underneath lullaby vocals backed up in a do-wappish manner.

Recently released, Snorri’s new album, Autumn skies keeps the strong instruments, but from the two tracks available to stream, the vocals have slightly shifted back towards the mellow smooth folk of the first album.  I particularly like the sound of Kveðja.  You can listen to both new tracks, as well as a slew of his back catalog on his Soundcloud page.  You can purchase the new Autumn Skies CD from the Record Records music shop, and his previous two albums are on Gogoyoko for listening or purchase pleasure.

To learn more and keep up with him, visit his website or Facebook page.  He’ll be performing at Iceland Airwaves this year and he always puts on a fantastic show, I suggest you check it out.