There are certain bands and events that have become staples of Iceland Airwaves for me.  I almost look just as forward to these events as I do the festival itself.

Off venue performances are key to the daytime schedule.  Scaled down and sometimes more intimate; these performances happen in record shops, coffee houses and even retail outfits playing to the street.  Available to everyone in Reykjavik, not just the wristbanded folk, it’s a good opportunity to see the bands play smaller sets.  This year there were over 200 Icelandic artists playing the approximate 650 performances.

I caught a laid back John Grant set.  John Grant is a big sweetheart so seeing him at an off venue is made even more special as his quick wit and charming demeanor really shine.  His keyboardists was sick for the performance so it was just him and Pétur on stage.  That strong baritone voice that could melt rock combined with Pétur’s extremely talented guitar made the Kvosin basement show fantastic.  We even got a teaser off the new album as during a keyboard snafu, he made up a new tune about evening time murders and broken keyboards.

I also caught Ghostigital at an off-venue event.  I fucking love this band, consisting of Einar Örn Benediktsson of Sugarcubes, and Curver Thoroddson, an amazing mixer who has worked with bands such as Kimono and Sigur Rós, these two always put on amazingly chaotic shows.  Every year Einar Örn is in rare form precisely spazzing out with a microphone, ranting about being alone and fuzzy televisions, all while Curver is at the helm tweaking knobs and distorting the mic making a perfect concoction of organized and blissful chaos.

The gig happened at the top Harpa with the sun setting through the prisms of glass while Einer Örn began in a mexican wrestling mask that was quickly shaken off revealing a face with multitudes of expression topping off their quick but potent set.  I’m pretty sure everyone walked away very satisfied they saw them, I definitely was.

Another band I always seek out is FM Belfast.  Over the years they have become more and more known to the world off the Iceland rock, and their shows are energetic interactions.  Árni, Lóa and crew really know how to throw a party, and this year was no exception.  From making 500+ people crouch on their knees mid set, to streamers and a pre-emptive depanting on stage, these guys know how to include the audience in on all the fun. 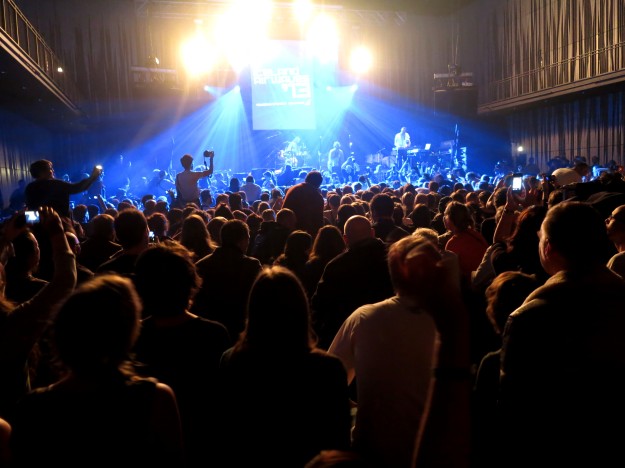 Entire Harpa audience on the ground

I was really impressed with Árni Vilhjálmsson this year as he brought that ability to naturally interact with the audience to both Nini Wilson and FM Belfast.  With two completely different bands and atmospheres, his natural ability to break down that performer/audience barrier is spectacular.

Æla is another guilty pleasure of mine.  And as of yet, they’ve never disappointed.

Typically cross-dressed, they are a band that definitely could not do a super bowl halftime event.  Copious amounts of nipple slippage, riding on the backs of the crowd as they sing away, and tux stripping to reveal a dress-clad singing member are all standard fair at an Æla gig.

at one point in the night, the band declared their love for, and pleaded for all the homosexuals in the crowd to come dance with them at the front of the stage.  Æla is fun and reminds me of the ole punk-rock standard of just rock out with your cock….

There is another festival that runs parallel to Airwaves, and it was at Bravó this year.  RafWaves is the love child of Ísar Logi Arnarsson and this year with over 30 local artists and DJ’s spread over two nights it was a great way to fill in and end both nights.  If the crowds get to be too much for you on the main drag and you just want to let your hair down and dance, I suggest you check out their website and plan to attend next year.

yet again, these annual performances did not disappoint.  the off-venue crowds were quite a bit larger this year, so I did have to miss a few performances I would have liked to have seen.  But over all my list was checked off and I didn’t go without at any point.